Switch to the US site

Select Your Country or Region
Continue

Quadruplets safely delivered at the Regional Specialist Hospital in Wroclaw

Recently, Grażyna Ohia and her colleagues at the Regional Specialist Hospital at Kamieńskiego Street in Wroclaw, Poland delivered quadruplets for the first time ever in the hospital’s history. Getinge’s Servo ventilators gave Adam, Alan, Kaj and Noe respiratory support during the first weeks of their lives in the neonatal intensive care unit. 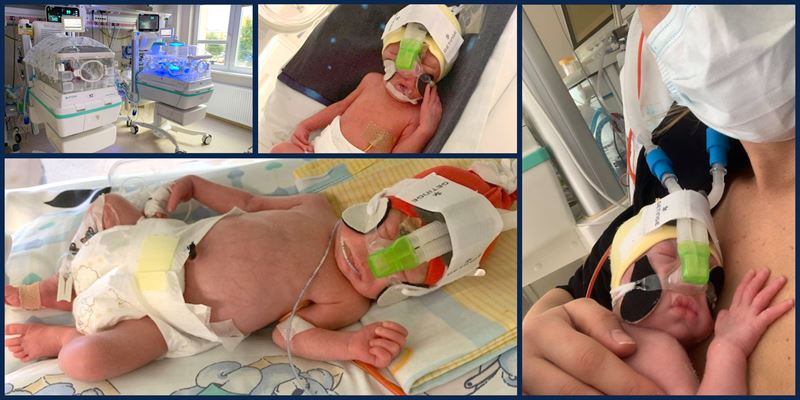 Delivering quadruplets is rare. Even though there had been several multiple births since the opening of the Regional Specialist Hospital in Wroclaw, Poland in 1984, they had not had any cases with quadruplets. This changed just recently, and Grażyna Ohia, Head of the neonatology department, and her colleagues spent weeks preparing for the historic moment.

“It was challenging since such a birth had never taken place at our hospital before. A premature birth is always a demanding situation where various things might occur, so we planned everything in detail, to be as prepared as possible. Working together with gynecologists, obstetricians and a perinatologist we determined the most optimal delivery date.”

In the 30th week of pregnancy, Grażyna Ohia and the team delivered four healthy boys through a C-section according to plan. The biggest one weighed 1550 grams, the smallest 1270 grams, and the other two about 1300 grams each. The babies were assigned to one neonatologist and midwife each, as they were transported in incubators to the neonatal intensive care unit (NIVA) where they would spend the first weeks of their lives.

“We connected them to Getinge’s Servo machines with non-invasive ventilation. We have been working with this equipment for years, it’s liked by our staff especially since it’s easy to use. In a situation where you have four babies to care for at once, especially with all of the other patients admitted to the hospital, there is no room for technical issues. You must know that you can rely on the equipment.”

The mother of the quadruplets recovered quickly after the delivery and there were no obstetrical complications. Together with the father and the older brother in the family, she was able to return home after a few days, counting down the days to when the newborns would be ready to come home.

Fifty days later the boys – Adam, Alan, Kaj and Noe – were discharged and could arrive home.

“For our team this has been an emotional experience that we will remain in our hearts forever. With good planning we managed to pull this off together despite already working at full capacity. The mother visited the boys every day and supported their development as much as she could before they were discharged. It was wonderful to see. Neonates are indeed exciting to work with, I love my job.”