Getinge’s 90-year heritage of providing world-class sterilizer equipment includes many significant technology leaps. Let’s take a closer look at some important milestones during the recent decades in the field of infection control. 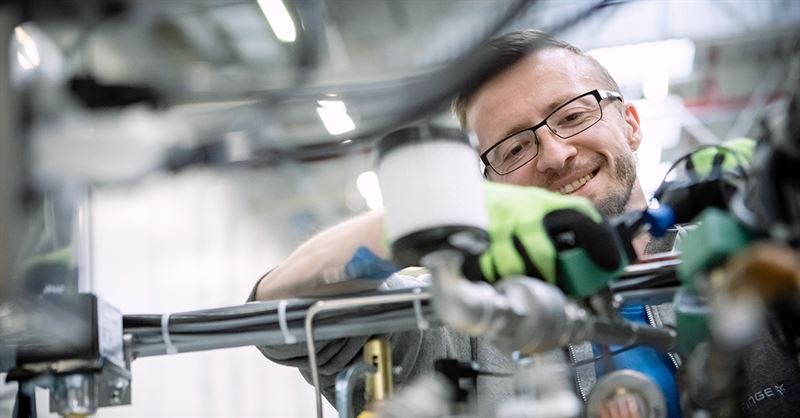 “The continuous focus on innovation during recent decades have made our sterilizers faster, smarter and much more efficient when it comes to water and energy consumption. Many times, we have been early to the market with features taken for granted in today’s sterilizers,” says Karolina Olofsson, Product Manager Steam Sterilizers.

The GE 66 sterilizer from the 1980s marked the start of a new era with features such as a revolutionary control system replacing the old technology for microprocessor controlled sterilizers and a new high performance vacuum pump.

Another invention was that the sterilizer itself was built on a modular system, enabling configuration according to standardized market requests. This is common today, but at that time it was rare in the sterilizer market.

“Some customers will always require unique machines but modularization enabled many orders to be easily configured based on a number of options selected in a proprietary configurator. This was Getinge’s first real sterilizer platform,” says Bengt Storberg, Senior Principal Engineer.

The GE 2066 steam sterilizer, launched in 1996 followed suit. It was unique in several ways compared to its predecessor and also featured the first Eco system for water saving.

The new ECO system, which reduced the water consumption, was an answer to a growing market requirement in some local markets.

“These models had an auxiliary heat exchanger and a function that circulated the vacuum pump's service water and separated water from the evacuated air. The design gave a great result and served as role model for later models seen in the market,” Bengt says.

Through a number of acquisitions, Getinge had production units around the world in the 1990's. Several of them manufactured sterilizers for local markets. As the development processes became more centralized, it could benefit from using the best solutions from the local units.

“The project to develop ‘world sterilizers’ covering demands and regulations in a global context began at the turn of the millennium. Except some local solutions in the United Kingdom and United States, all other markets were covered by the HS66 from the early 2000s, and the remaining local solutions had some global features,” Bengt explains.

Later upgrades of the global sterilizers were a direct result of the market demand for faster processes and higher throughput. A design by the team in the UK, featuring larger drainpipe dimensions, sloped piping to the condenser and larger steam inlets, brought the cycle times down to 31-45 minutes.

Today’s steam sterilizer portfolio includes the GSS67 and GSS610 based on the latest technology, yet with a strong bond to their heritage by providing a high throughput in a sustainable way.

The most recent model GSS67F, which was released in 2016, still has the same double functionality by featuring high-capacity steam sterilizing as well as low-temperature formaldehyde sterilization. The flexibility of processing sensitive instruments like endoscopes as well as normal instrument sets in the same sterilizer saves space and extends sterilization abilities.

In 2015, Getinge acquired the Turkish manufacturer Stericool. The low-temperature process in this product is using vaporized hydrogen peroxide (VH2O2) to achieve a fast reprocessing cycle of products sensitive to heat and humidity.

The control system and user interface are important part of the aim to design sterilizers that are user-friendly both for customers and service technicians. Getinge started to develop control systems for its sterilizers inhouse in the 1980s using a Programmable Autoclave Control System (PACS).

PACS 2000, launched in 1991, was the first digitalized control system. It also had groundbreaking features, such as a patented system for measuring temperature and pressure with much higher accuracy than previous solutions on the market.

The next generation, PACS 3000, featured several improvements, including connectivity. The control system could communicate with Getinge’s software T-DOC, which supports the hospitals with complete instrument traceability and quality assurance in the sterile supply flow.

“Over the years, the digital evolution has helped us move from user interfaces with buttons and screens providing very little information to large, intuitive touchscreens with easy access to the entire sterilizer functionality. Our latest control system, the award-winning Centric, is a great example of how cooperation with operators drives the development of more user-friendly medical equipment,” Karolina concludes.

This article is part of a series of stories highlighting Getinge’s 90-year-old history of building sterilizers.

This text is intended for an audience outside of the US.