What is eCPR and how does it work?

Survival rates for patients with out-of-hospital cardiac arrests (OHCA) are low and decrease with time between cardiac arrest and intervention[1]. Mortality rates for OHCA patients are estimated to be around 90% globally[1], and those patients who do survive often experience neurological deficits. Recent randomized controlled trials [12][14] suggest that eCPR (extracorporeal cardiopulmonary resuscitation) may potentially increase the odds of positive clinical outcomes in selected OHCA patients. Innovations from leading centers are bringing this life-saving treatment to larger patient populations.

Find out more about our VV-ECMO and VA-ECMO solutions

eCPR is typically performed in-hospital, but due to the time-sensitive nature of OHCA, some hospitals have optimized their programs to minimize the time between arrest and intervention. This includes careful coordination with first responders, rapid mobilization of highly trained teams and, in some cases, initiation outside of the hospital.

One well-known example is a “mobile ECMO Truck,” developed by the University of Minnesota team in the United States [5]. This mobile ECMO Truck and the ECMO team meet the patient partway to the hospital. Reducing the time to cannulation, the team has expanded the coverage area and brought the therapy to more patients.

There are also some programs in Europe for treating patients with early eCPR. In the ON-SCENE trial led by Dr. Dinis Reis Miranda, four mobile helicopter-based medical teams are bringing pre-hospital eCPR to the entire Netherlands [6][7]. Each of the teams are equipped with the Getinge Cardiohelp system to enable earlier treatment for OHCA patients. The trial allows the team to place a VA-ECMO on patients who haven’t responded to cardiopulmonary resuscitation (CPR) within 20 minutes. The three-year trial started in 2022 and has a goal of saving 30% of the 200 patients in the ECMO group [8]. 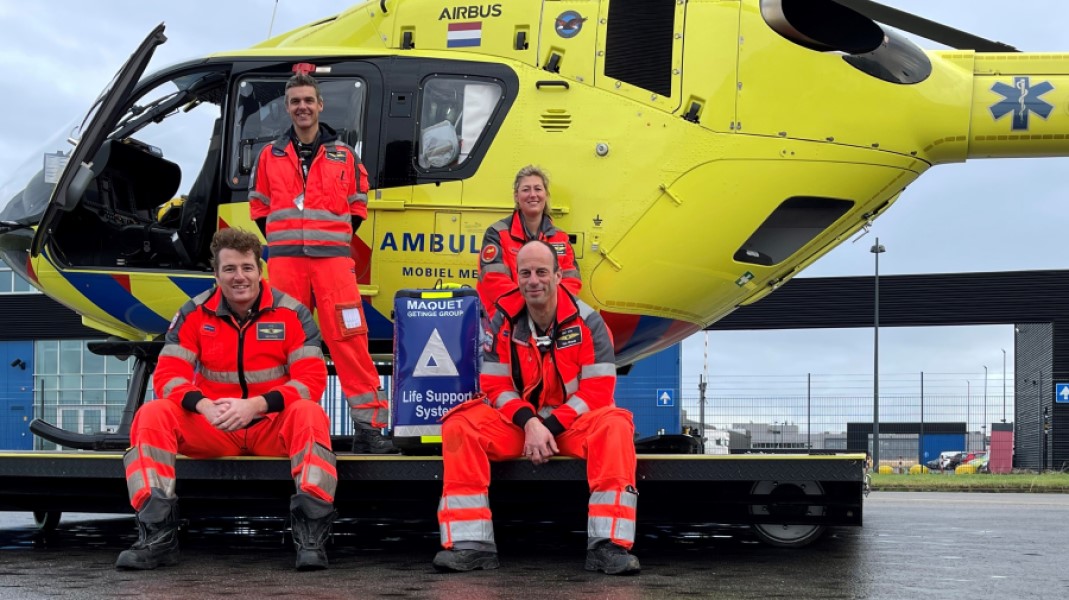 In the metropolitan area of Paris, France, a mobile intensive care unit has used ECMO and eCPR in the treatment of OHCA patients for many years. Dr. Lionel Lamhaut’s team tracked outcome data from the mobile intensive care unit from 2011 to 2015. Their research identified 156 patients treated with eCPR. The data suggests that early intervention of any kind improved survival rates, but a more aggressive eCPR strategy even raised survival rates in refractory OHCA patients from 3% to 38%. [9]

Clinical research supports the use of eCPR

The “ARREST” single-center, randomized controlled trial (2020) [12], which was performed by a team of the University of Minnesota in the Minneapolis metropolitan area (USA), demonstrated that eCPR can improve survival in carefully selected OHCA patients. ARREST was the first randomized trial of eCPR that demonstrated a survival benefit from VA-ECMO in OHCA patients. Thirty OHCA patients with refractory ventricular fibrillation (VF) or pulseless ventricular tachycardia (VT) were transported to the hospital under mechanical CPR. They were then randomized into either an eCPR arm where ECMO was initiated in the cath lab, and a control arm where standard advanced cardiac life support (ACLS) was applied. Within the eCPR group, 43% of patients survived to discharge, compared with 7% of patients in the ACLS group. The study was terminated at the first preplanned interim analysis after 30 patients due to the superior results in the eCPR arm. 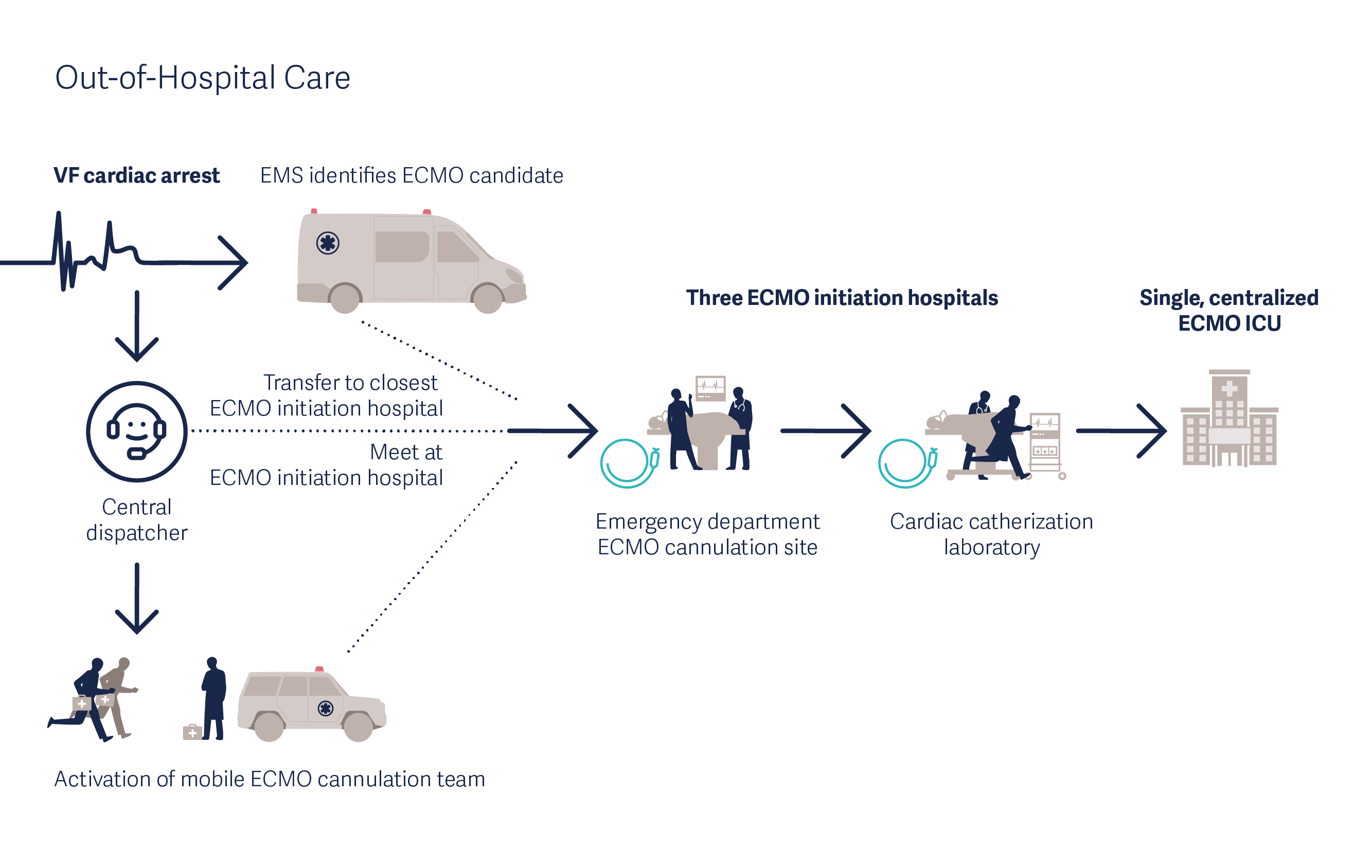 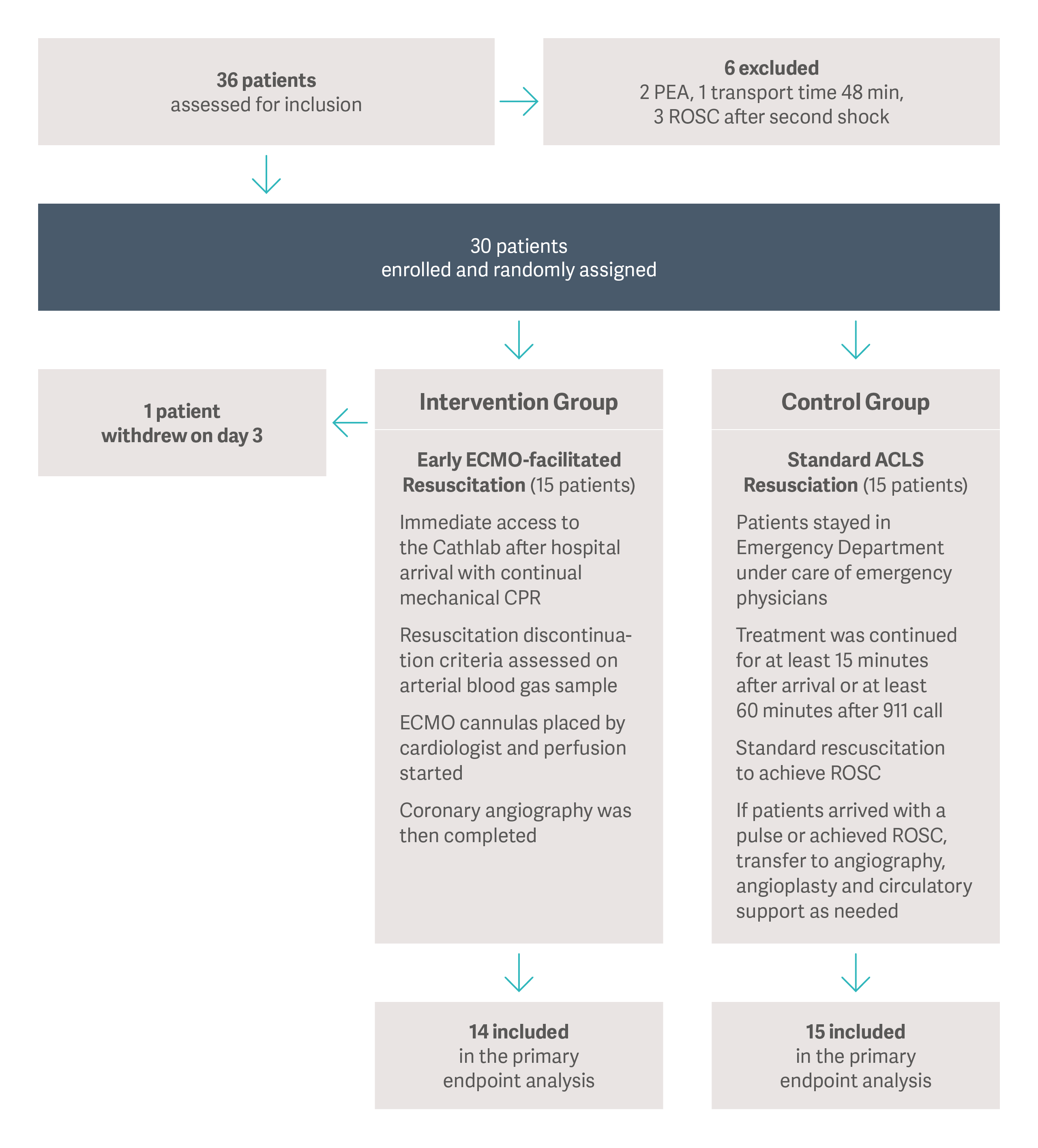 Patient grouping in the ARREST trial

In another trial conducted in Prague (Czech Republic), Belohlavek et al. (2022)[14] examined whether early interventions such as transport, eCPR, and other treatments improve outcomes for OHCA patients at 180 days. More than 4,000 OHCA patients were evaluated with 264 ultimately meeting inclusion criteria and enrolled in the randomized trial comparing hyperinvasive techniques against the standard ACLS protocol at the scene.

In the main analysis, 31.5% of the invasive strategy group and 22.0% of the standard strategy group survived to 180 days with good neurologic outcomes. While the differences between the two groups were not statistically significant (p = 0.09), the absolute difference of 9.5% in favor of ECMO was promising. These results intersected a prespecified stopping rule for futility.

The results suggest a benefit to an invasive approach that includes eCPR, with a 9.5% improvement in survival and CPC 1 or 2.

Although a proper selection of patients who will benefit from eCPR is essential, to date there is no consensus about the criteria for starting intra-arrest transport and implementing eCPR. Patients without prehospital ROSC (Return of Spontaneous Circulation) have very low chances to survive even with prolonged conventional ACLS without eCPR (median time 66 min). Initial shockable rhythm, younger age and shorter time of resuscitation were all associated with better 180-day survival in refractory OHCA (r-OHCA). The majority of r-OHCA survivors treated with eCPR had good neurological outcomes at 180 days.[15]

While additional research is warranted, early examples show a positive correlation between well-coordinated early intervention with eCPR and improved clinical outcomes for OHCA patients. This may prove to be particularly important due to the increased incidence and fatality rate of OHCA during the pandemic period.[16][17] Bringing VA-ECMO to patients in the field reduces the time to treatment and can potentially increase the rates of survival.

"Without access to an Edi signal you can’t give patients the best possible respiratory care."

Using the electrical activity of the diaphragm (Edi) to evaluate ICU patients’ need for respiratory support is a valuable and often superior complement to standard monitoring parameter, according to senior respiratory consultant Sten Borgström.

Monitoring the strength of the patient's breathing effort, titrating the sedation, and selecting the correct mode of ventilation is vital when transitioning from controlled to assisted ventilation.